Dr. Julius TepperBorn and raised in NYC, Dr. Tepper graduated from York College of CUNY in 1971. He then went to Europe to study veterinary medicine, graduating with honors from the University de Liege in Brussels, Belgium in 1976. Returning that year to NYC, he began practicing and held a special interest in birds and exotic animals. After many requests from clients, he opened the Long Island Fish Hospital in 1998 to care for the health of pet fish. Dr. Tepper served as Treasurer of the International Association for Aquatic Animal Medicine from 2006- 09, as an Officer on the Executive Board of the World Aquatic Veterinary Medical Association (WAVMA) since its formation in 2006 through 2012, and as President in 2011. He was honored by WAVMA in 2012 as one of five to be named as a Fellow. In 2013, he was certified by WAVMA as an aquatic veterinarian (CertAqV). He has been a member of the Association of Reptile and Amphibian Veterinarians, Association of Avian Veterinarians, the AVMA and state and local veterinary associations. With a special interest in ponds, watergardens and koi, Dr. Tepper developed a phytoremedial device for water quality improvement and received a U.S. patent for this invention. Known as “Pond’toons”, these are currently in use in ponds, watergardens and in quarantine and treatment tanks for koi. Dr. Tepper has authored many papers on fish health and pondkeeping.

Nick Saint-Erne, DVM has been keeping exotic pets since getting his first pet turtle in 1966, and setting up his first aquarium in 1968. His major field of study was Fisheries Biology for his Bachelor of Science degree. In 1984 he received his Doctor of Veterinary Medicine degree from Kansas State University. He practiced small animal and exotic pet medicine in Las Vegas, Nevada for 15 years (1984-1999). Since 1999, he has lived in Arizona where he is the Quality Assurance Veterinarian for PetSmart Inc., which is based in Phoenix. PetSmart is the largest North American pet and pet supply company, with $8 Billion in annual sales. His current role is to supervise the care of the fish and reptiles sold at over 1600 PetSmart stores in the United States, Canada and Puerto Rico. This includes annual visits to pet breeder’s facilities in the US and Canada, and supervising the health care of the tropical fish in 5 distribution facilities, each containing over 4000 fish tanks with state-of-the-art recirculating filtration systems. In 1982 Dr. Saint-Erne attended the “AQUAVET” program on Aquatic Veterinary Medicine at the Marine Biological Laboratory in Woods Hole, Massachusetts. He wrote the book “Diseases of Koi” in 1994, and another fish medicine book “Advanced Koi Care” in 2002, now in its second edition. Since 1985 he has lectured to numerous fish and koi clubs around the U.S., and lectures on Aquatic Veterinary Medicine to veterinarians throughout the world. In 2013, he was one of the first veterinarians who were awarded the Certified Aquatic Veterinarian designation. He is an Executive Board member of the World Aquatic Veterinary Medical Association and was the WAVMA President for 2016, and is a member of the American Veterinary Medical Association, the Association of Reptile and Amphibian Veterinarians. He was the 2010 Chairman for the AVMA Aquatic Veterinary Medical Committee, and is currently the Executive Editor for the WAVMA quarterly journal. He is also an Adjunct Professor for Exotic Pet and Aquatic Animal Medicine at the Midwestern University College of Veterinary Medicine, in Glendale, Arizona. In 2017, he was elected as a Distinguished Fellow of the World Aquatic Veterinary Medical Association.

As “The Fish Vet”, Dr Richmond Loh and his team across Australia provide veterinary, and pathology services for a range of clients including pet fish, display aquaria, retailers and fish farmers. He has been admitted to the Australian and New Zealand College of Veterinary Scientists by examinations in the subjects of Pathobiology, and Aquatic Animal Health. He is a Certified Aquatic Veterinarian and has been awarded the George Alexander International Fellowship by the International Specialised Skills Institute. He promotes aquatic veterinary services by producing educational materials (http:// tinyurl.com/thefishdoctor).

Dr. Scarfe is CEO of Aquatic Veterinary Associates International (AVAI) LLC, and has 40+ years of experience as a University Professor, an owner of private veterinary practices, and has work with and for National and International veterinary organizations, and governmental agencies in numerous countries. He currently supervises AVAI veterinarians in several countries who provide services to aquaculture producers and industries throughout the world. Previously, as Assistant Director of Scientific Activities he has overseen aquatic and other veterinary issues for the American Veterinary Medical Association, and has consulted with numerous veterinary organizations and governmental agencies in several countries, on veterinary education, and legislative and regulatory animal health issues. He is the current President of the World Aquatic Veterinary Medical Association, and an Extraordinary Professor and the Director of the Center of Excellence for Aquatic Veterinary Education, Diagnostics and Biosecurity Training at the University of Pretoria, Faculty of Veterinary Science ( Onderstepoort, S. Africa), and also serves as the Associate Director of the International Aquatic Veterinary Biosecurity Consortium, with the Secretariat located within the Centre of Excellence for Aquatic Veterinary Education & Biosecurity at Tierärztliche Fakultät, Ludwig Maximillians University (Munich, Germany). In addition, as a USDA-APHIS Veterinary Medical Officer with the U.S. National Animal Health Response Corps he assists with responses to outbreaks of important foreign animal disease outbreaks in the U.S. Within these positions he assists several international organizations and veterinary schools in North and Central America, Europe, Africa and Asia refine and implement aquatic veterinary academic and continuing education programs to ensure a global well-trained aquatic veterinary global workforce. Many of the key activities involve developing and running aquatic veterinary biosecurity training programs to assist governmental agencies, aquaculture producers and industries, and private practitioners prevent, control and eradicate infectious diseases. 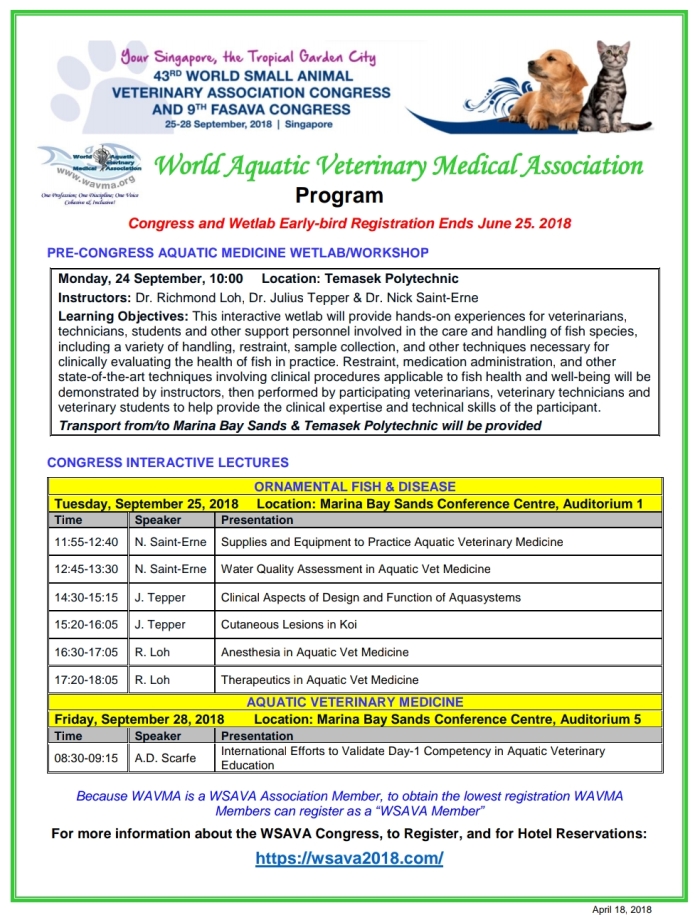