This revision now includes my statement and evidence on the mistruths of the article.

To explain, at the time (2014), I didn’t have enough information to decide whether it was a hoax, or whether it was true in parts. As such, it was published on my blog to see what others had to say. Some 3 years later, a reader from (would you believe it) Richmond (not me!) has prompted me to review this blogged article… and rightly so.

Well, if you’re ever unsure about material circulating around the internet, Snopes.com do some good fact-checking. The mentioned article appears to be all patched together, from unrelated content, to produce this hoax:

Our reader had also gone to the trouble of finding the original sources of some of the pictures that have been used inappropriately in the article:

It also appears that Turner Radio Network is illegitimate, and the Google link to it, brings you to a worrisome site. And Wikipedia even has a page dedicated to “Hal Turner“.

Our reader also provided a link to the work that has been performed through DEC regarding testing of fish samples for radiation – http://dec.alaska.gov/eh/Radiation/index.html

So, without further ado, pasted below is the mentioned article; and you can now tell everyone that this is a hoax:

Americans and Canadians have been eating radioactive fish filled with bloody, cancerous tumors as a result of fish being contaminated with huge amounts of radiation in the Pacific ocean from the Fukushima nuclear disaster in Japan.

In March, 2011 an earthquake off the coast of Japan caused a Tsunami which hit the Fukushima Nuclear Power Plant, causing three reactors to melt down.  Not only has that disaster site been spewing 400 tons of highly radioactive water into the Pacific Ocean every single day since the earthquake, the radiation has reached the US West Coast and the fish you’ve been eating from the Pacific ocean are full of it!  The radiation in the fish is so terrible that wild-caught Alaskan Salmon and Canadian white fish are being found to have bloody, cancerous, tumors throughout their bodies.

The government and the nuclear power industry claim we have nothing to worry about.  When you see the photos below, you may want decide for yourself if they’re telling the truth.

According to the Local Environmental Observers (LEO) Network in Hydaburg, Alaska, they have found strange growths in the flesh or meat of salmon. “We were fishing for cohos (silver salmon) at the mouth of the Hydaburg River with line and reel.” said Brian Holter, Jr. who said that eight fish  were filled up inside with strange growths that were either white or pink in color. “On the outside the fish looked fine. The growths looked kind of like individual little salmon eggs, and about the same size. Other people were seeing the same kind of growths in their fish as well.” he continued.

This is what the tumors inside three separate Salmon looked like: 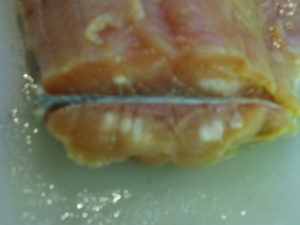 The map below will give readers an understanding of the proximity of Hydaburg, Alaska to the Fukushima, Japan disaster site to demonstrate how far the effects of Fukushima radiation have traveled in the three years since the disaster began:

FAR NORTHERN ALASKA IMPACTED TOO Other volunteers from LEO have come across even more disturbing cancerous tumors and bloody lesions on fish. According to another LEO volunteer, Sam Kunaknana, in Nuiqsut, Alaska, for the past few months they have been catching sick fish on Nigliq Channel and upstream from Nigliq Channel to the Colville River.  The fish have had bloody lesions and tumors on them.

Sadly, the images above aren’t nearly the worst of it.  Other fishermen and even Marine Biologists have caught other fish showing classic signs of radiation-caused cancerous tumors.    “In all the years I’ve been fishing I never caught any fish like this. Caught 3 more sick fish with same markings and this time one had some kind of growths coming out from its mouth  Most people in our community eat this fish.” Sam Kunaknana continued.

Certainly, the Pacific Ocean is huge.  Yet as the map above shows, distance from Fukushima did not seem to matter with the fish caught near Hydaburg, Alaska.

The map below, shows the location of the other LEO volunteer, Sam Kunaknana, in Nuiqsut, Alaska, thousands of miles farther away from Fukushima than Hyanburg. In fact, Nuiqsut, Alaska is about as far north as one can get from Fukushima, but the radiation has gotten there too.

FISH IN CANADA ALSO AFFECTED If the strange lesions and cancerous tumors were only affecting Salmon, one might theorize that a particular disease had struck a particular species.  That’s not the case. As shown below, Alberta Pike are also being caught with grotesque cancerous tumors protruding outside their bodies. 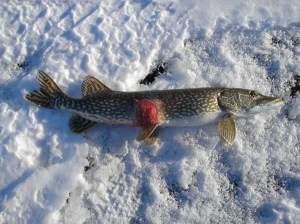 Tumors are also affecting other species of fish like the Canadian Whitefish shown below:

Vancouver Island Area Herring are also being found to be bleeding from their gills, eyes, mouths and bellies.

HISTORIC FIRST: GREAT WHITE SHARK WITH CANCEROUS TUMOR! We’ve all heard for years that sharks don’t get cancer.  Well, when they swim around the Pacific Ocean nowadays, the radiation is so terrible that even sharks are getting cancer. Recently, researchers in Australia noticed a large tumor protruding from the mouth of a great white shark, as well as another mass on the head of a bronze whaler shark. The great white’s tumor measured 1 foot (30 centimeters) long and 1 foot wide, according to a study describing the tumors published online in November in the Journal of Fish Diseases. “This was a very unusual sight as we have never before seen a white shark with tumors,” said Rachel Robbins, a study co-author and shark biologist at the Fox Shark Research Foundation, near Adelaide, in southern Australia.   Behold, the first photo in the history of human existence, showing a Great White Shark with a cancerous tumor on its mouth: 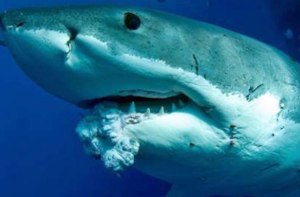 NOT JUST FISH BEING AFFECTED As stated earlier, some have said that there are explanations other than radiation for these ailments.  Certainly that might be worthy of consideration.  Yet, how many of these so called “ailments” can cross-species?  You see, it is not just fish being affected; mammals are too.

Below are images of various types of Seals, Walruses and even Polar Bears.  ALL of them are suffering bloody lesions, some are suffering external tumors and others are losing their fur – hair loss is one of the first signs of radiation poisoning, even in humans.  See for yourself: 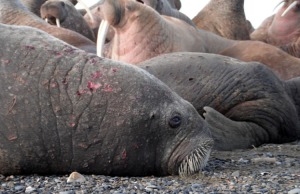 Walruses: Polar Bear: Losing hair is one of the first signs of radiation poisoning.

U.S. GOVERNMENT HAS DONE — NOTHING The federal government of the United States of America has done absolutely NOTHING to test for radiation in the Pacific Ocean.  Nothing.

Freedom of Information Act (FOIA) requests to the U.S. Fish and Wildlife Service confirm they “have not tested for radiation and have no plans to do so in the future.”  A FOIA request encompassing the entire Department of the Interior, via the Office of the Secretary, resulted in being told “The office of the Secretary does not have any records relating to your request.”  The Federal Aviation Administration FOIA response was “FAA is not involved.”  The FOIA response from the Nuclear Regulatory Agency was “NRC does not conduct the types of tests in your FOIA request.” The Federal Energy Regulatory Commission (FERC) replied “We do not conduct such tests.” The Environmental Protection Agency replied “Please understand that these reports take time to create. Report 154 is currently under review at our laboratory and will be published once the review is complete.”  (That report is over a year old and they still haven’t reviewed it yet???) The National Oceanographic and Atmospheric Administration (NOAA) replied they want $7098.84 to fill the request; their charges are as follows:

In the meantime, fish from the Pacific Ocean are contaminated with — and dying from — Fukushima radiation and that means the radiation is in the seafood that YOU, your family, maybe even your cats and dogs are eating.

You folks on the west coast of North America might want to consider your activities this coming summer.  Maybe if YOU go swimming in the same water these fish swam in, a couple years later YOU could come out looking like they look!

As for everyone else, head-on-out to your local supermarket or restaurant and eat-up; the government says it’s safe and they _never_ lie!

One thought on “Are you eating “Fukushima Radiation and Bloody, Cancerous Tumors in Fish Contaminated By Radiation”?”